To download a flier on Z Ward z-ward-flyer The information is also displayed below.

Tours of Z Ward are back on though with more limited numbers than the 50 previously. Hopefully this will change as COVID 19 becomes more under control. Tours of Z Ward (entry via 63 Conyngham St Glenside) are scheduled roughly once a fortnight. Tours are from 14:00 to 16:00 .  2021 Tours coming up are on Saturday 10th April; Saturday 24th April; Saturday 1st May; Sunday 23rd May. To attend, ring Ayers House on 8223 1234 and ask to speak to Catherine or Patrick who handle the bookings for the National Trust. Numbers are limited on each tour to a maximum of 30 so no real need to be concerned about the numbers.

Designed by Edward John Woods, SA Architect in Chief from 1878 to 1886, the construction of Z Ward for Criminal and Refractory Patients commenced in September 1884 with the contract being let to William Pett & Son, builders. Work proceeded smoothly, completion being achieved in the second half of 1886. The polychromatic brickwork technique used by Wood in its design is the most elaborate, sophisticated example of this architectural style in South Australia

Additionally, Wood incorporated ventilation flues into each room and cell as he had done in designing Old Parliament House, the Mortlock Library and Martindale Hall. Fresh air being considered an important element in curing mental illness.

Lack of staffing and financial resources prevented the new facility for 45 inmates from being opened until 1888, two years after its completion.

Only a minority of patients who were accommodated in Z Ward were Governor’s pleasure patients: those acquitted of their crime on the grounds of their insanity. The majority were people charged and convicted of a minor offence, but exhibiting sufficient signs of psychiatric instability that it was thought more beneficial for them to be placed in an asylum rather than in a gaol to serve their sentence. Another small group of patients were those who were considered to be dangerous to themselves or to others and were placed in there for the protection of the Asylum’s other inmates.

Governor’s pleasure inmates were placed at night in the cells to the right on the ground floor with this area closed off by a cyclone screen from the rest of the inmates. The dining area was immediately in front and adjacent to the stairs.

Airing Court showing a shelter & Ha Ha as it was. Cell with bed and night seen of upstairs cells with patient belongings outside each cell, 1973 (both © Robert Adams).

Originally known as “L Ward”, the name was changed to Z Ward following the installation of telephones throughout the hospital in the 1900s.

Mishearing the name when the telephone was answered led callers to mistake the ”L” for “Hell”. Adding a line to the “L” to form a “Z” saved in the cost of remarking the ward’s laundry.

Z Ward closed on the 13th December 1973 with the 10 occupants being transferred to the Yatala Security Hospital, only for that facility in turn to be closed in 1988-89 and replaced by James Nash House. 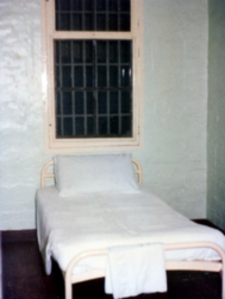 4 responses to “Z Ward Tours now on at Glenside”